Divinity Wiki
Register
Don't have an account?
Sign In
Advertisement
in: Wizards, The Black Ring, Flames of Vengeance characters

To Find a Wizard

Behrlihn is a Mage and Follower of Chaos, a secondary character in Flames of Vengeance, and a possible antagonist.

In the distant past Behrlihn was part of a group of chaos-worshipping wizards, either the black ring or a precursor to it, that wished to bring forth the Lord of Chaos. Other wizards, wanting to stop the Lord of Chaos' return, contacted the other races and started the Council of Seven. The War of the Wizards ended with a Council victory. All of the Chaos mages were executed and their essences were extracted from their lifeless bodies, including Behrlihn's.

Behrlihn's essence was imprisoned in the Antediluvian Vault beneath the then-village of Aleroth, below the eventual site of the Champion Academy, and the tomb entrance was guarded by two barriers: a magical shield and a lock which required five orbs to open. Behrlihn's consciousness was freed when Zandalor removed the shield, the first barrier, and used it to shield Aleroth from a fleet of flying fortresses. Now partly free, the Chaos mage sought the Dragon Knight, trapped in the Plane of Hypnerotomachia, and struck a deal: free him and not only would the Dragon Knight gain the power to directly attack Ygerna's flying fortress, but Lucian would walk among his people once more. He also made it clear he would rejoin the black ring; believing Damian's victory to be inevitable, he felt like his brief betrayal wouldn't cause any problems for him in the future.

Throughout the Dragon Knight's search for keys and clues to Behrlihn's revival, he acted as a tutor, albeit a snarky one with disturbing tendencies. He would point out places of importance to his subject, eager to hasten his arrival to the mortal plane once more. Bellegar, too, was aware of the foul mage lurking around the Dragon Knight and tried several times to seal both of them back.

After venturing through the Antediluvian Vault, the Dragon Knight was in position to free Behrlihn. Bellegar offered another option; leave Behrlihn contained and he would give the Dragon Knight a device that would allow them to attack Ygerna without the use of Behrlihn's power.

If the Dragon Knight frees Behrlihn, he keeps his word; giving them the means to attack the flying fortresses while also flying off and rejoining the Black Ring. When the Dragon Knight fights Ygerna she has the aid of the treacherous mage.

If the Dragon Knight takes Bellegar's offer, Behrlihn rages against the confines of his cell but is unable to escape. Additionally, Lucian is freed without Behrlihn's power after the death of Ygerna. 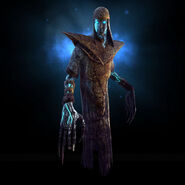