Edit
watch 02:40
World of Warcraft: Dragonflight - The Loop
Do you like this video?
Play Sound
Faction

The Black Ring are a collective of dark mages, aligned to Damian, the adopted son of Lucian and host to part of the soul of Lord of Chaos.

Prior to the Black Ring, the precursor to the group was known as the Legion of the Damned: a mixture of necromancers from Stormfist Castle who were cast out for performing the dark arts; demons under the rule of Lord Chaos and other dark magicians. These mages were granted long life and power by their lord and during the second assault on Rivellon in 611 AD were found side by side in the front lines with their demonic allies. Losing this battle and their lord to Ruben Ferol and the seven races those that remained, fled, being killed by their opponents as they retreated. Despite this, a few survived and lived in the shadows, hoping to return their lord back to Rivellon and rebuilt with fresh blood, becoming the Black Ring; their predecessors considered them to be weak in comparison to the League; celebrating their various misdemeanours, but not knowing what true terror is.[1]

Although long established by 1218 AD, the Ring was lead by the Demon of Lies as they made an attempt to resurrect the Lord of Chaos. Although Chaos had been banished back to Hell part of his soul lived on in the mortal realm through Ulthring's famed weapon, the Sword of Lies. Last carried by Ralph, the apprentice to Ruben Ferol, who sealed away the blade in the realm within the walls of Stormfist Castle to prevent Chaos' revival; it was released and used in the ritual to give their lord corporeal form.

Lucian the Divine was able to defeat the Black Ring and the Demon of the Lies, rendering the ritual partially successful. Damian, the child who was to become the form of Chaos, was imbued with the life essence of Chaos. Lucian, unable to kill the babe, took him into his care and attempted to raise Damian as his own.[2] The Black Ring, aware of his potential, resumed their attempts to return Chaos to the world and during Damian's adolescence, sent Ygerna, a Black Ring operative to help him realise his potential and birth right.

Ygerna was able to establish contact and make headway with Damian, the boy falling in love with this woman. When Lucian discovered who the young woman was, he had her summarily executed, Damian was to be none-the-wiser to this event; however, he inadvertently walked in on the execution and his emotions drove him to the Black Ring, whom, in turn appointed him their leader as they had long desired.

Damian's position at the head of the Ring was interrupted in 1233 AD by his adoptive father in conflict known as Chaos War. During this war the Divine Order used a deathfog bomb to stem the flow of the ring, at the cost of the elven lands and life. Due to suffering immense loses to the deathfog the Ring briefly turned away from Damian, who had been imprisoned by his father in Nemesis, the Black Ring started to worship the God King who contacted them.

The Black Ring's activities over the next 11 years were subdued, although recorded as being seen in the region of the island Reaper's Eye, the Reaper's Coast and on Nameless Isle, they were not the paradigm of fear they were before as the world was concerned with the incoming Voidwoken attacks.[3]

After the Veil was sealed in 1242 AD the Black Ring assembled in Black Forest again under the lead of Damian whose activity during the Voidwoken invasion is unknown. The Ring set to war again few years later in 1244 AD, this time turning a Dragon Knight against the Divine and slaying him, removing their main obstacle. Under Damian they managed to sow discourse throughout the realm, deflecting the attention from themselves, with their enemies now focusing on the Dragon Knights. During this time they managed to acquire flying fortresses, floating land masses from which they could launch their attacks in relative safety.

By 1300 AD, they were largely forgotten or ignored, only a handful of agents still focusing on them, Zandalor, the Divines right hand and the Dragon Knight Talana. Talana's death and transference of her powers to a newly initiated Dragon Slayer as she was dying from an attack by slayer's order prompted Damian's reappearance. The slayer's success in acquiring the Battle Tower on Sentinel Island prompted the Ring to launch an assault with their fortresses on Broken Valley and Sentinel Island, slaughtering those who lived in the valley and rendering the land uninhabitable by using Deathfog.

The slayer turned Dragon Knight's attempt to remove Damian from his seat of power, resulted in the Ring having one of their martyr's returned to them. Ygerna now at the side of Damian allowed the Ring to refocus on Aleroth, the city which had already been besieged with the undead. This turn of events allowed the former League of the Damned general Behrlihn, who was also in the Hall of Echoes to take advantage of the situation. Using the now trapped Knight as a vassal to release him so he could return to their ranks. Behrlihn's plan did not go as anticipated. The resurrected Dragon Knight in turn took the fight to the Black Ring, crashing a ship into Damian's flying fortress, breaking the siege, killing Ygerna and returning Lucian to Rivellon once more, forcing the Black Ring into retreat. 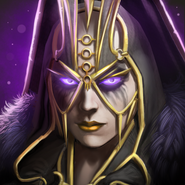 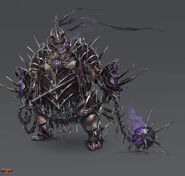 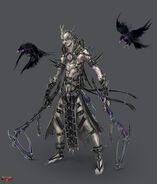 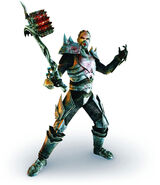