Divinity Wiki
Register
Don't have an account?
Sign In
Advertisement
in: Eternals, Demons, The Prophecy characters,
and 3 more

Edit
watch 02:46
The Quarry - The Loop
Do you like this video?
Play Sound

League of the Damned
Black Ring

Lord of Chaos is the creator and god of the demon race trapped in Tartarus, more commonly known as hell.

Up until at least 1218 AD, Chaos was believed to be the precursor god from which the Seven Gods came to be. However, in reality he was an Eternal who alongside the Seven sized control of Source.[1] After obtaining this power, he created the demon race: cunning, arrogant and Source hungry beings who bickered amongst themselves and served him as his slaves.

When the Seven created their own races, Chaos and his legion waged war against them until finally, the Seven left mortal plane, dragging Chaos and his minions to the plane between the Hall of Echoes and Rivellon.

Trapped between the realm of the living and death, Chaos created the dimension known as hell, where all demons and damned souls now reside for eternity. He himself has continued to influence the mortal races from his cage, encouraging war and spreading chaos as a means to open a doorway for himself back to Rivellon. There are two known occasions where Chaos physically or spiritually returned to Rivellon:

Although he has yet to return to Rivellon, the Sword of Lies, remained on the mortal plane, containing an element of his soul to ensue a third return. Taken by Ralph from the battlefield, it attempted to take control of the battlemage's body and did so successfully, however, the sword and Ralph were forcibly sealed within the inescapable vault below Stormfist. As a result his return on this occassion was short-lived, dying with Ralph's body as it died from hunger and dehydration.

The Sword itself was recovered in 1218 AD by Duke Janus Ferol and from here the Black Ring attempted to implant their icon's soul, through a dark ritual into a young babe, later named Damian, by Lucian, after thwarting the Rings plan.

As the ritual itself failed, Chaos was unable to possess Damian, however his power and evil still resided within the child. 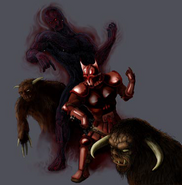 Chaos in his physical form standing next to wizard Ulthring