The Undeads are the first enemies you meet. They have been attacking Cyseal from 2 years ago, and are the biggest problem of Legion Commander Aureus. Skeletons have high piercing resistance but low crushing resistance, so handle them with blunt weapons. 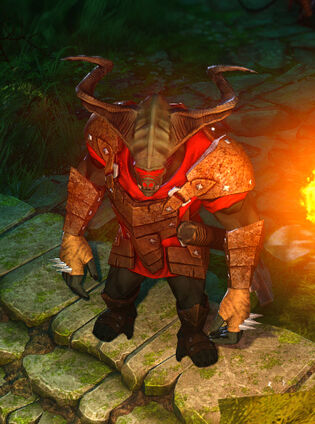 Orcs are big green-skinned creatures you meet. They are attacking Cyseal, and Arhu is concerned about the fact that the Orcs are following a human leader. Later on, you meet black-skinned Dread Orcs corrupted by the Tenebrium dust spread on the Phantom Forests. It seems that a female Orc is much more powerful than a male Orc, because there are 2 female Orc leaders.

Trolls are big creatures. They seems to have relatively low intelligence, but they can communicate with humans. They usually stand by a way or a bridge and get tolls from whoever wants to cross it. There are a Zombie Troll you can meet during the quest The Zombie Troll.

There is a Zombie troll in the Lucella Mines, in a locked room to the left of jail cell, Dreksis is locked up in . He is with a group of immaculates and a meeting him engages a battle for more EXP!

Goblins are enemies you can see at Luculla Forest.

Imps are small creatures you meet in Divinity: Original Sin. ZixZax is an imp historian who have been ordered by the God to record every history of every being. 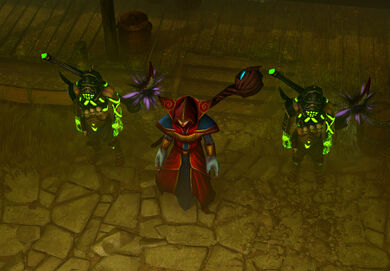 Cyclops are high level enemies you meet at the Eastern part of the Phantom Forest.

Demons are vile creatures summoned by dark wizards. There are 4 types of demons who resemble each elements. If you have a character with high Loremaster, you can find out which element they are weak at.

Shadows are dark creatures who are summoned by dark magic.

There are many warlocks, who are usually a member of the Immaculates. Warlocks are annoying enemies because of their powerful damaging spells and various debuff spells.

It seems that there are no dragons in Divinity: Original Sin. You can find remains of dragons during the quest Kitty Love.

Retrieved from "https://divinity.fandom.com/wiki/Creatures_(Original_Sin)?oldid=55208"
Community content is available under CC-BY-SA unless otherwise noted.