Demons are the children of the eighth Eternal lord, the Lord of Chaos and are one of the most known enemies of the Races and whose influence across Rivellon has spread throughout the Ages.

Demons are beings created by Lord of Chaos and were the first race created after the Seven Gods ascended to power. Originally residing on Rivellon itself, they were the first intelligent race to be made and subsequently enslaved by their creator. The Seven Gods who disagreed with greedy Chaos, started a war to annihilate demons and their God. This war, waged between both Gods and their children was in favour of Chaos. The Seven who realised this, decided to leave Rivellon and drag unwilling Chaos with them, thus trapping him between Rivellon and Hall of Echoes. The demons residing on Rivellon, where all banished back to their creator, now residing in Tartarus, a place more commonly known as Hell which grew around him. [1]

Eversince their imprisonment in this realm, both demons and their God plotted to get back on Rivellon or other realms such as Nemesis, and claim the Source of the races who banished them using all means possible, making deals, attacking and possessing people in their dreams, letting themselves be summoned only to turn on their "masters". [2] Due to their imprisonment, they can only be summoned if one knows the demons true name. The name is also required if one wishes to enter the demons own dimension. [3]In one case they nearly managed to enslave the race of Imps, favoured children of the Seven God Xantezza, however most of them escaped to Rivellon from Nemesis. [citation needed] Due to Chaos strenghtening influence on the planet and its inhabitants the Gods were forced to mark or select few champions among the races and elevate them to Divinity in order to combat Demons and Voidwoken who were threatening the realm. [4]

In spite of demons attacking and using the races to further their agenda the races were also able to use their demonic adversaries plans to their advantage. Corvus, a great demon ally of the Architect managed to set in motion a decline of Sigurd's empire but was defeated and imprisoned in the heart of an airship known as Raven by Maxos. Maxos and the Commander would then use his knowledge to further their interest and tip the scales of war to their advantage. [5]

Over the centuries the demons, where mostly a nuisance to the races rather than a direct threat. Most of them, such as Corvus, made deals with mortals in order to further their own agenda, rather than outright wiping them out. This changed in 100 AD when a group of Wizards, residing on Stormfist were banished by the ancestors of the Ferol's ruling family. This cabal made a direct pact with Lord of Chaos and in desire for revenge and power summoned his spirit and his children unto the planet directly. This cabal of Wizards formed first known allies of demons, known as the Legion of the Damned. [6]

The demons and their allies then waged a war unto the humanity, however they were defeated when dwarves arrived to help humans. Defeated but not dead, the Chaos, his followers and his children retreated and bid their time until they would be ready to dominate the races once again. [7]

It was in 611 AD when demons led by the Chaos and his general, the wizard Ulthring were near annihilation of the Seven races and their lands. In spite of their numbers, their enemies at that time known as the League of the Seven, managed to banish their God by sacrificing themselves. Disorganised, demons and their allies were either slaughtered, captured or forced to hide once more. Those wizards that were captured, including Behrlihn, were executed and their souls imprisoned. The only known ally to have escaped such fate is Zenfar Blutsporn who several centuries later died of old age. [8]

The banishment and disband of the Legion however did not stop them permanently, for their successors now known as the Black Ring bid their time and worked with demons in order to unleash the spark of his soul, known as Demon of Lies, which was trapped in catacombs beneath Stormfist.

Sometime prior to 1218 AD, young Janus Ferol, found the Sword of Lies and upon touching it was immediatelly possessed and devoured by the Demon of Lies. Assuming his identity he took control of Ferol and alongside his servants. In 1218 AD after Lucian was sacrificed in Divine Ritual, the Demon of Lies assumed his true form and with his minions stormed the Council of Seven, killing all its members except Zandalor and Kroxy who escaped. After eliminating the Council, the demons and the Black Ring, rampaged on Rivellon once more, forcing orcs to abandon their ancestral home and burning Ferol to the ground.

Several months later, the Demon of Lies, initiated the ritual to summon Lord of Chaos unto the Rivellon. The demons were occupying the lands of Yuthul Gor until Lucian came back from the land of the death and, with the help of Patriarch the Black, Zandalor and Kroxy, attacked the Black Ring base of operations where the summoning took place. All the demons and Black Ring members, both above and underground were slaughtered however their plan succeeded and the soul of Lord of Chaos managed to possess a small human newborn, whom Lucian would adopt in an attempt to prevent the influence of Chaos from rampaging, since he could not bring himself to kill the newborn child. The name of the boy was Damian. [9]

In 1233 AD after Lucian executed Ygerna, Damian fled to the Black Ring and became the leader the cult, starting the event known as the Chaos War. However in a battle Damian was tricked by the Divine, imprisoned in Nemesis and cursed so that he would not return to Rivellon unless Lucian himself or his follower would will it. In spite of their leader being imprisoned and presumed dead the Black Ring advanced until the event known as The Withering took place. During this event Alexandar unleashed Deathfog through a rift portal Ifan ben-Mezd delivered to the elves. This decimated the Black Ring and made them abandon their demonic allies and turn towards the God King and his Voidwoken. [10]

Damian who had regained his memory, after the Divine's curse which wiped out his memory worn of, made an imp servant steal a sacred crystal from Temple of Raan and unleashed hoards of demons unto the Raanaar civilisation. The Raanaar who were taken by suprise were brought to near extiction or enslaved at the hands of Archdemons who invaded Nemesis such as Asmodheus who later helped Damian return to Rivellon in 1238 AD. [11]

Between 1233 AD and 1242 AD the demons mostly operated on their own on Rivellon, some made deals with mortals such as Sanguinia Tell or were merely traveling from Nemesis. However one archdemon, known as Adramahlihk in his desire for power possessed a Godwoken champion of Rhalic, known as Lohse and attempted to wrestle Divinity from the dying Seven Gods. Besides Adramahlihk, demons such as Almira or half-demon Malady would influence or help Godwoken in their travels across the Rivellon as well as help combat the Black Ring who had sworn themselves to the God King.[12]

After the Veil was sealed in 1242 AD, Damian took control of the Black Ring, who once again allied themselves with Chaos Lord and his demons. Two years later he launched an assault on Rivellon which resulted in the Great War. [13] During this event demons burned several cities to the ground including Aleroth. [14]

In 1300 AD demons were mainly working under the the Black Ring to whom they were powerful, but savage and vicious allies. In one case a demon Zagan nested in the mountains of Orobas Fjords and demanded regular sacrifices from the inhabitants of the High Hall. In the other a Black Ring general Kearas husband Velanir lost his life, when he dared to bet a demon that he would not dare to kill a Black Ring general's husband. [15] Aside from these instances several cults worshipping demons and eldritch horrors sprouted on Rivellon, one of which, known as Cult of Abraxas the Viridian Horror, took roots in Aleroth and in the New Order. [16]

Due to the unpredictable, bud dark nature of their Creator, demons are very varied species capable of taking many forms. In spite of not having standart physical traits in the manner of the Seven races; demons seem to always done and resemble predators. Large claws, thorns, bone spikes, fiery appendages, strong scales, dense fur are few of the many things demons may have. In some cases they may have tentacles, insectoid or large bat like wings. Demons may be both bipedal and quadrupedal and may assume different forms should the situation demand it and if they have the power to do so.

Most demons are carnivorous predators who will do anything to kill and feast on the souls and bodies of their enemies. Some demons however possess greater intelect and are not only capable of using magic but can also command other demons. The demon hierarchy is based upon power where stronger demons command the less powerfull ones and who may even serve the mortal followers and summoners outside of Tartarus. [17]

Demons have a tendency towards selfishness, viciousness, and cruelty; even when one is not outright violent or malicious they will often act towards their own goals. They hunger for the Source of the mortal races, and they will do anything to get their hands, claws or tentacles on it. For the most part Demons are cunning and intelligent, they often attempt to strike deals with members of the mortal races, though such deals invariably favor the demon and typically end in unforeseen consequences for the mortal in question. Arrogance is a common trait among Demons, especially concerning their views on the mortal races, though this is often their undoing as that arrogance may cause them to critically underestimate foes.

Due to their dark and vicious nature demons have a vulnerability towards the powers of the Divine and Seven Gods. A simple blessing spell may cause harm to anyone with just a drop of demonic blood. [18] The sacred power of the Divine himself is so vile to demons, that person who has his blessing may exorcise a demons from those possessed by a mere touch. These demons will be forced to leave the possessed persons body and in their rage may attack the exorcist. [19] 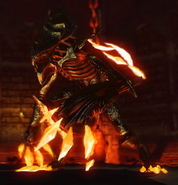 Ba'al, an Archdemon general of the Black Ring 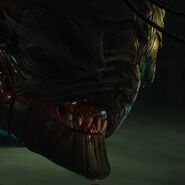 Razakel, a Demon that was Soul Forged with the necromancer Laiken