Divinity: Original Sin II is the sixth game in the Divinity series and indirect sequel to Divinity: Original Sin: an isometric, single-player or multiplayer fantasy RPG with tactical turn-based combat. The central theme of the game is "your origins affect who you are and what chances you get in life." [1]

As with Original Sin, an upgraded version of the Divinity Engine is included for the game. The engine has a more prominent place in the game itself as it links into the Game Master Mode.

In 1242 AD, the use of Source magic has been forbidden as a danger to the world, for when it is used, the voidwoken follow shortly behind. Sourcerers are rounded up by the Divine Order—now under the authority of Lucian's son, Alexandar, following his father's death—and taken to Fort Joy on Reapers' Eye, the former bastion of the Sourcerer King Braccus Rex, for the safety of Rivellon.

Unknown to those who have been collared and set aboard the ships to the island, this journey does not merely result in ostricision and incarceration, but a far more sinister fate meets many of those who land upon its shores. For a small number of the taken, there is a far grander future ahead.

Once an act has been completed, it is not possible to return any previous areas. Any items left in the area at the time of departure are lost, unless stored on the Lady Vengeance, which acts as the character's base camp after the second act.

At the beginning of the game, the player creates a single character to act as their avatar. Aside from gender, appearance and class (under preset), one can also select their races and origin; these two characteristics are grouped in selection. For those who want to refine their character character further skills, attributes and abilities can be adjusted once a class has been selected. talents can be switched out and a limited number of tags can be changed, with exception of if an origin, rather than custom character has been selected.

Each race has its own unique skill, which cannot be changed.

Origin characters, although slightly more restricted on character creation, each have their own unique tag, dialogue and quest line to follow.

In combat, each character takes turns to attack, with Action Points limiting the type and quantity of actions that can be undertaken. Moving reduces Action Points based on distance travelled and attacks/skills reduce Action Points based on usage requirements. Damage afflicted is affected by the Physical and Magical Armor of the target and any resistances they have to the type of attack. In addition to this, the environment can also be turned to the player's (dis)advantage; for example a pool of water can be transformed into an ice sheet or electric conduit to cause a trip or shock hazard, or turned into steam, reducing visibility for those in the cloud.

In addition to the updated graphics and performance improvements, the new game also rewrites much of the original dialogue and includes new areas, fights, and a new Story difficulty level that allows players to enjoy the lore more and worry about combat less. The character Beast has been rewritten with more dialogue and given a deeper, more enhanced story. The game mechanics in the sewers were also enhanced with additional traps and dangers.

Players who pre-ordered the Definitive Edition on console will be able to recruit Sir Lora - a mini-companion complete with his own storyline, look and animations. In this new story - Sir Lora, a Squirrel Knight, is being chased by the Knights of Drey, an apocalyptic order of furry knights who believe in the coming of the Great Acorn[2] By playing through his story, players will unlock new recipes and uncover the mystery surrounding the Great Acorn. 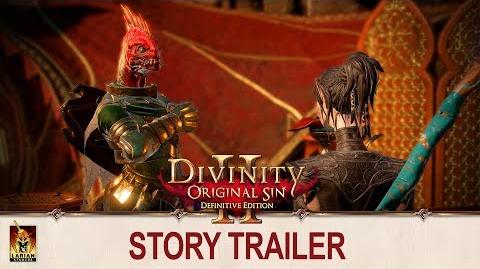