Goblins are common, mostly evil, creatures. They are the first enemies you'll fight in Farglow. After that you'll find them in many other locations, including underground camps and caves, throughout your adventures in Rivellon. Goblins can be warriors, shamans and healers, and have various skin colors.

According to Kaan, goblins barter for skins, troll teeth, colored pebbles, and pieces of wood to carve a totem. Najaad mentions that they also have an innate attraction to shiny objects. Goblin outcasts such as Nathirap and Eareb find their way of life uncivilized. Groth notes that goblins have a rich history of storytelling that is passed down verbally, because most goblins cannot read or write their own language.

Killing a goblin may provide you with a goblin heart, used in the Hearttaker quest given Richard by in Broken Valley's village. 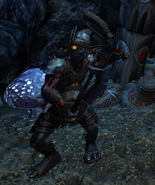 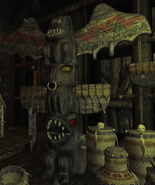 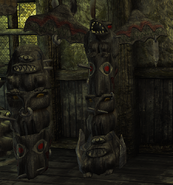 Goblin totem
Add a photo to this gallery
Retrieved from "https://divinity.fandom.com/wiki/Goblin?oldid=56376"
Community content is available under CC-BY-SA unless otherwise noted.