The Beast o' the Sea

“
I was just thinking about someone I used to know. My cousin. The queen, in fact. A tyrant. I tried to stop her but - things don't always go according to plan. She cast me out to a forgotten island, and made short work of my allies, too. Lucky for me, I was able to commandeer a ship, and began a new life for myself, out on the high seas. But I hear the Queen is at it again - and there's something darker behind her madcap schemes this time. If I don't stop her, I don't know who will.
„

Marcus Miles better known as Beast is the cousin of the dwarven queen Justinia who was sent unto Fort Joy in 1242 AD.

A dwarven noble who had between 1233 AD and 1242 AD banded with other nobles and tried to overthrow dwarven queen Justinia. The coup was unfortunately for him a disaster and 19 of his fellow allied nobles were swiftly hanged in gallows. Unlike other nobles he was banished and left for death on some remote and deserted island. After escaping from the island he is captured by the magisters, collared and transported to Fort Joy on the Merryweather.

When the Merryweather is attacked by the voidwoken, Marcus manages to make it off board, landing on Reaper's Eye as was planned. Rather than reside within the walls of Fort Joy, he spends his time by the shipwreck on the northwest coast. 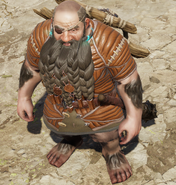