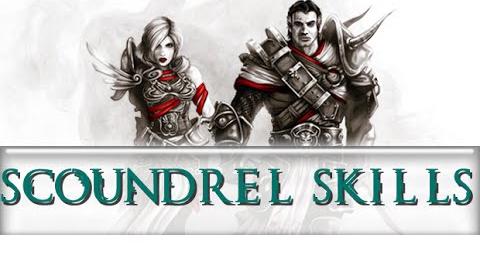 Scoundrel skills have access to the most Status Effects besides Witchcraft, but deal damage as they inflict them. With almost half of the skills requiring a dagger to be equipped, this is a skill tree best dipped into for Fast Track, Walk in Shadows, Cloak and Dagger and Charming Touch. Otherwise the damage is lower than the other physical abilities; often if a dagger is equipped for 2 AP to attack, attacking 4 times and using Daggers Drawn exactly equal.

There are 3 abilities available in the Scoundrel tree, based on the skill level:

Level 5 of Scoundrel is not required by any skill and only unlocks the talent "Headstrong" which makes the character more resistant to being immobilized.

The bracket after the CD of each skill indicates the minimum cooldown (achieved when DEX is 15 or higher).

∞) Can only be used once per combat.

Retrieved from "https://divinity.fandom.com/wiki/Scoundrel?oldid=70925"
Community content is available under CC-BY-SA unless otherwise noted.