Divinity Wiki
Register
Don't have an account?
Sign In
Advertisement
in: Elves, House of Shadows, Origin characters,
and 2 more
English

House of Shadows
The Mother Tree

“
I used to be a slave, kept under the thumb of the Master: the bastard that made me hunt down my own kin. How did he do that, you ask? With the living scar you see on my cheek, this horror that takes no more than a song sung by Master dearest to control my very thoughts. But now the tables have turned. I broke my shackles. And when I finally find him, I will make the Master sing a very different kind of song...

Sebille Kaleran is an elven Sourcerer and Prime Scion of the mother tree, who was taken aboard the Merryweather to Fort Joy in 1242 AD.

An elf who was enslaved to the Shadow Master, via the power of a living scar on her face. Sebille managed to break free his control and intentionally sought her way to Fort Joy to find Stingtail, who marked her so in the first place. On her arms are the names of all these she has killed, many of them (unbeknownst to her) scions of various tribes.

As she embarks on her journey as a Godwoken at Reaper's Coast to seek Divinity and revenge on her former master, she discovers from Saheila, another scion, that she is the Prime Scion; one who will replace the Mother Tree. Her journey to the Nameless Isle intertwines her two objectives, when meeting with the Mother Tree, it is discovered that it is in fact, sick and dying, with the only means of curing of it of its ails is the heart of the Shadow Master.

Saheila will meet with Sebille again and advise her that the future she sees requires the death of the Mother Tree and for Sebille to take its place. As Sebille draws near to the Shadow Master, he is singing her song, one that will again ensnare her in his control. Her only means of ensuring her permanent freedom is to take his life. 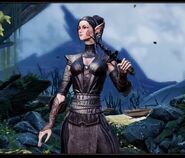