Edit
watch 02:53
GTA: The Criminal Enterprises - The Loop
Do you like this video?
Play Sound
Release history of games 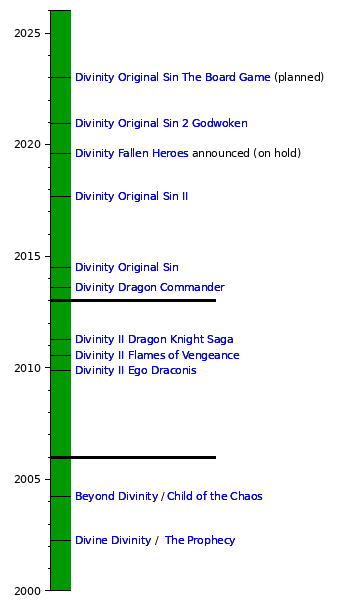 Where unreleased with no approximate or confirmed release date, the announcement date has been used

The Divinity series spans across seven games, two novels, a graphic novel, lore book and board game. The series can be broadly broken into three eras based on the game style and genre:

The majority of the series takes place between 1218 AD (Anno Deorum) and 1300 AD in Rivellon: the known lands of the world in which the series is based. A small number of titles take place in the preceding centuries, including in the years preceding AD, known as Anno Rivellonis, AR (equivalent to BC). In the original game, Divine Divinity, the time period was also broken into eras of 400-600 years[2] and these are referenced in multiple in-game books; however, this is not referenced in the official timeline given by Larian Studios[3], nor is it referenced in the lore book, Modern Chronicles of Reapers' Coast. These eras cannot be dated within the official timeline, however, Divine Divinity is canonically set the Era of Chaos and the following games are set in either the same era, or the Era of Lies.

Each story in the series takes place in the following order within the timeline:

The games themselves do not run sequentially in the series timeline; however, they all considered to be canon, with no game invalidating another. This does lead to several continuity issues between the current and earlier games, plus the novella; many can be interpreted as being written from a personal perspective, or as biographies written by historians.

The novella and lore book has been given no official stance on canon, however they were made supplementary to the games (and released as part of), but contain inconsistencies with the later releases in the series. At most, the books should be considered semi-canon; where there is a conflict between a book and game, the game takes precedent.