watch 04:21
Wiki Targeted (Games)
Do you like this video?
Play Sound
Original Sin side quest

The Dog Seeking A Hero

The Dog Seeking A Hero is a quest in Divinity: Original Sin.

When exploring east of Cyseal, Doxy can be encountered. If there is a member in the party who has the Pet Pal talent, Doxy can be spoken to who, who will respond saying "that you smell like the hero he's been waiting for."

Follow Doxy to a pack of wolves who must be defeated, Doxy will disappear shortly after; thus completing the quest.

There is a trove of items "buried" under a tree near where the wolves spawn. 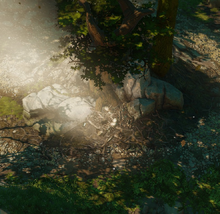 Possible remains of Doxy's master
Add a photo to this gallery
Retrieved from "https://divinity.fandom.com/wiki/The_Dog_Seeking_A_Hero?oldid=54239"
Community content is available under CC-BY-SA unless otherwise noted.