Trolls are huge and strong creatures that inhabit Rivellon .

Huge, strong and savage these are generally the main characteristics of most common trolls found across Rivellon. Most of these had adapted to their environment and are contrary to popular believe intelligent to some degree. To hunt their prey they can either use their strong arms or clubs or they build traps which are large covered holes in the ground. Some trolls though may also live near bridges where they can demand a toll from passing adventurers.

The most powerful and intelligent trolls may crown themselves as kings or queens and own large territory while also having various troll followers. One of such trolls were King Bragi and Queen Ormhildr who ruled over large portion of Aleroth and Broken Valley regions. They had built shrines underneath Aleroth. Their prized possessions hidden there were cursed, later inflicting harm those who sought to steal them from their shrines.

In this game player may encounter two trolls in Reapers Coast who had taken residence on bridges.

Trolls can first be seen attacking the warriors from Band of Brutes, if they are punished by Louis. They are also encountered:

The hero may find a book about trolls titled Survive the Trolls Survival Guide during their adventures. The book Adventuring for Dummies, Part Two also warns of the dangers of digging for treasure in troll pits. 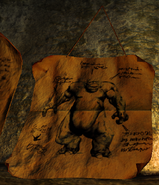 A sketch of a troll

A petrified troll
Add a photo to this gallery
Retrieved from "https://divinity.fandom.com/wiki/Troll?oldid=58411"
Community content is available under CC-BY-SA unless otherwise noted.