“
The Voidwoken. Disgusting things. They ravaged the land they touched and infected the air they breathed.

Voidwoken are creatures of the Void ruled by the God King.

Voidwoken are beings from the Void who are eversince the end of the Chaos War in 1233 AD invading Rivellon to gain the Source. Voidwoken enter Rivellon through a hole in the Veil which separates the Void from Rivellon, when they do enter Rivellon they bring Void with them.

Due to the Void being a force of death and destruction, the Voidwoken have great negative impact on the nature and its denizes. Due to destructive impact of the Deathfog on the elven forest many of its animals had risen from the dead as Void-touched beings. Some of those few who survived such as the Forest Tiger, had entered the service of the God King willingly and became Sworn.

From 1233 AD onwards the influence of the Void had spread and grown stronger throughout Rivellon. Many creatures which had originally stayed in their respective areas became Voidwoken and started to massively attack the Seven Races. Due to these attacks the Divine Order began to hunt Sourcerers who were their most prized targets because of their Source.

In 1242 AD the Voidwoken became more agressive and are attacking Magister caravans transporting Sourcerers on Reaper's Coast as well as human cities such as Arx.

Due to the hole in the Veil being sealed in 1242 AD, the Voidwoken who were the original inhabitants of Rivellon known as the Eternals, were pushed back into the Void and sealed there, thus preventing them from invading Rivellon again.

Voidwoken come in many shapes and sizes, each more dangerous than previous. The Voidwoken come most of the time in the form of various insectoids, demon-like creatures or undead monsters. Their size varies drastically some come in form of small larvae while the largest of the Voidwoken are easily capable of crushing human build frigates. Due to their exposure to the Void, the Voidwoken deal with powers of the Void including various curses which affect the environment and may grant them power over the elements and their cursed counterparts. The influence of the Void on elements may occasionally create Void infused elementals of various sizes and strengths.

The weakest and smallest of the Voidwoken are the larvae like Void hatchlings, Viscous voidlings and Volatile voidlings. These have little to no power or armour, however some of them may be capable of exploding upon death, leaving cursed fire in their wake.

The stronger Voidwoken come in much greater varieties than their weaker counterparts and are capable of wielding elements as well as being much more resilient. The more common are insect-like, winged Voidwoken called Dune Mantise which are all capable of flight. Their names are derived from the respective elements they use in combat. Storm-wing Voidwoken fight with electricity, Cold-crawler Voidwoken with ice and water. The Noxious Voidwoken and Venom-wing Voidwoken are harnessing poison and acid and Necro-wing Voidwoken wield devastating fire. [1]

Voidwoken species are not limited to just insects however. The underground is main hunting teritory of Fluorescent Voidling and Armoured Voidling [2] alongside the most dangerous Voidwoken Drillworm [3] which is capable of digging tunnels and may attack surface dwellers. At sea or swamps Voidwoken Deep-dwellers hunt and may be followed by group of Slippery Voidlings. Within human cities, Voidwoken may take form of various spiders including Void-touched Crawler and Fog-Swollen Crawler.

When someone uses Source or when the influence of the Void is particularly strong, the Voidwoken may be summoned in form of elementals amongst which oil and fire voidlings as well as the bigger primordial oil and primordial fire voidlings are most prominent.

Voidwoken variety does not stop there however some voidwoken appear in form of primitive vampyres called Vampiric Voidwoken or Voidwoken Bloodfury [4]. These Voidwoken are not only capable of flight but are known to heal their wounds by leeching the life force of their enemies. The more humanoid Voidwoken soldiers are known as Abyssal Void Flayer and Abyssal Void Devourer [5].

Amongst the most dangerous Voidwoken belong those which are the biggest, deadliest and most intelligent with the ability of speech. This category includes varius nightmares and specifically dwarven nightmares known as Lamenting Abomination. The undead rising hellbird called Harbinger of Doom [4] and the ocean dwelling Kraken. [6]

Arguably the most elusive if not most dangerous is the mythic Void Dragon, which is the ancient enemy of the goddess Astarte. 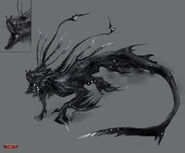