Edit
watch 02:05
Wiki Targeted (Games)
Do you like this video?
Play Sound

Warming the Crowd is a quest available in Divinity: Original Sin.

Alternatively, you can follow these steps if you fail the RPS check with Gallagher (The journal entries for these steps are written down in the quest Headless Nick).

(After speaking with Cedric) We met Cedric, a frustrated entertainer at the fair, who told us he was desperate to attract a crowd.

(After speaking with Gallagher) We met Gallagher, a crowd warmer, who told us the performer Reginald had paid him to enliven the show.

(After failing Gallagher's RPS check) Gallagher couldn't be convinced to work for Cedric. Reginald's crowd is full as ever, while Cedric plays to empty benches.

(After succeeding Gallagher's RPS check) We convinced Gallagher to draw a crowd for Ceric instead.

(After talking to Reginald) We told Reginald that his crowd warmer was working for Cedric now. He didn't take the news well.

(After stealing Nick's Head) Since we made off with his star performer, Reginald had to end his show. 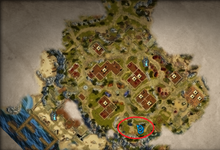 The location for the quest, southern Cyseal town
Русский
Community content is available under CC-BY-SA unless otherwise noted.