To Find a Wizard

Come to No Harm

Stormfist Castle
Council of the Seven

“
There is truth, and there is the perception of it. You will find out later which of the two has been the helmsman of the course you steer.

Zandalor the Wise[1] is a wizard of great importance throughout most of the Divinity series.

Zandalor is first encountered after the Hero is slain by a Dragon Rider near Aleroth. His objective is to gather the Marked Ones, as they are the only people who can oppose whatever the Black Ring is planning. After two of the Marked Ones are killed by the Black Ring, he takes the Hero - the last Marked One - to the old chambers of the Council of Seven, where he seeks to reform the Council so he can make the Hero into the Divine One.

After reforming the Council, Zandalor successfully carries out the ritual to start the Hero's transition into the Divine One, but before he and the Council can bring them back to life, Duke Janus Ferol arrives. Revealing his true demonic form, he kills the entire Council except for Zandalor (who he wanted to save for last) and Kroxy (who was playing dead). He escaped the Council chambers with the help of Arhu, who was hiding nearby.

After the Hero, now the Divine One, arrives back in Rivellon, they encounter Zandalor and Arhu fighting Black Ring Imps. Zandalor explains that it has been two months and the Hero must stop the Demon as soon as possible, directing them to the dragon known as Patriarch. After the Hero slays the Demon, Zandalor and Arhu look on as they exit the Demon's lair with baby Damian in their arms.

After the Divine One's rise to power, Zandalor became Lucian's main advisor. It was he who first felt the dark teachings of Ygerna and warned Lucian, leading to her capture and execution. When the war started Zandalor pleaded with Lucian that Damian had gone too far and had to be put down. Lucian however, like before, couldn't bring himself to kill Damian and left Damian behind in Nemesis, much to Zandalor's dismay.

When Damian returned and started a new war Zandalor fought alongside the armies of Rivellon. However, when news of Lucian's death reached his ears Zandalor was greatly saddened. Nevertheless, many years later when a Dragon Knight was cornered by Slayers, Zandalor teleported in and defended the knight allowing it to escape. This made the slayers accuse Zandalor of treason and being a dragon sympathizer causing his fall from grace and flight into hiding.

Zandalor first appears in Broken Valley after the Slayer meets the last dragon knight, Talana. He speaks of the powers and responsibility given to the Slayer by Talana. Later, he appears a few times at Sentinel Island to explain a few things about the tower. He is met once again in Aleroth, where he needs the Slayer's help closing rifts and aids them to obtain the shield needed to journey into the Hall of Echoes for the quest Come to No Harm.

Like the Dragon Knight, Zandalor was also deceived by Ygerna and helped bring her back to life, assuming it would kill Damian due to their improper Soul Forging.

During the Black Ring's siege of Aleroth, Zandalor disables one of the barriers around Behrlihn's prison and repurposes it to stop the city's destruction. He tells Augustus to search for Behrlihn, who in turn sends Rhode to try and find him, but Bellegar opposes his goal; he points out that Zandalor was also certain of his plan to bring Ygerna back to life, and that bringing back Behrlihn could cause more harm than good once more.

At the end of the Dragon Knight Saga, Zandalor stands by Lucian as the Divine One returns from Hypnerotomachia.

In Divinity: Original Sin, he is the last of his kind, the Keeper of the Source; keeper of its memory. He spent his lifetime to preserve Rivellon, but now he fears that his private affairs have done more to harm it.

Zandalor was the Sorcerer who trained the White Witch Icara and her sister, the Conduit Leandra. He was in a relationship with both of them, but finally chose Icara. This is the reason why Leandra cut the soul forge between Icara and fled, and got corrupted by the Void.

He tried to keep Leandra from entering the First Garden to open the Godbox and free the Void Dragon. But Leandra and her Death Knights ambushed him and he was about to die.

At the final stage of the quest Follow the Wizard, you can meet Zandalor in the Source Temple of the Dark Forest. His amulet is made of the last Star Stone that enables the Protagonists to enter the last zone in the End of Time; The First Garden. The Protagonists confront the Void Dragon in this place. Also, by the power of the activated Star Stone, Zandalor recovers his health.

He cheers up the Protagonists when they enter the First Garden to confront the Void Dragon.

Interactions with the Player Character - Beyond Divinity[]

Interactions with the Player Character - Flames of Vengeance[] 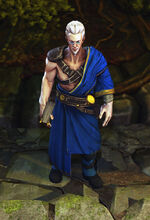 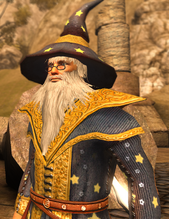